Waco, Texas (May 8, 2021): The 21st Rip Curl GromSearch National Final presented by Banzai Bowls wrapped up its most challenging season yet on the freshwater peaks of the BSR Surf Resort in Waco, TX. A season that saw qualifiers battle it out via video submission came together in one of the most spectacular shows in junior surfing history. Four divisions composed of four surfers from four different regions across the United States went head-to-head for the GromSearch National Titles. Not to mention, the incredible action from our Banzai Bowls Airshow, PerfectSwell Barrel Shootout presented by GoPro and the Softech Expression Session, digitally judged by Mr. Mason Ho himself.

The Main Event featured a stacked field of the nation’s top 16 surfers who faced off on PerfectSwell’s custom GromSearch event wave. The winners of their divisions headed home with a cool $1000 and an authentic Waco-made bull horn trophy.

With no waiting period and perfect, non-stop waves on tap, the breezy Waco morning was buzzing with energy. Competitors warmed up in the pool before the horn, preparing their predetermined runs for each of their waves. PerfectSwell’s custom wave with one-minute intervals ensured an even playing field with identical waves every set. 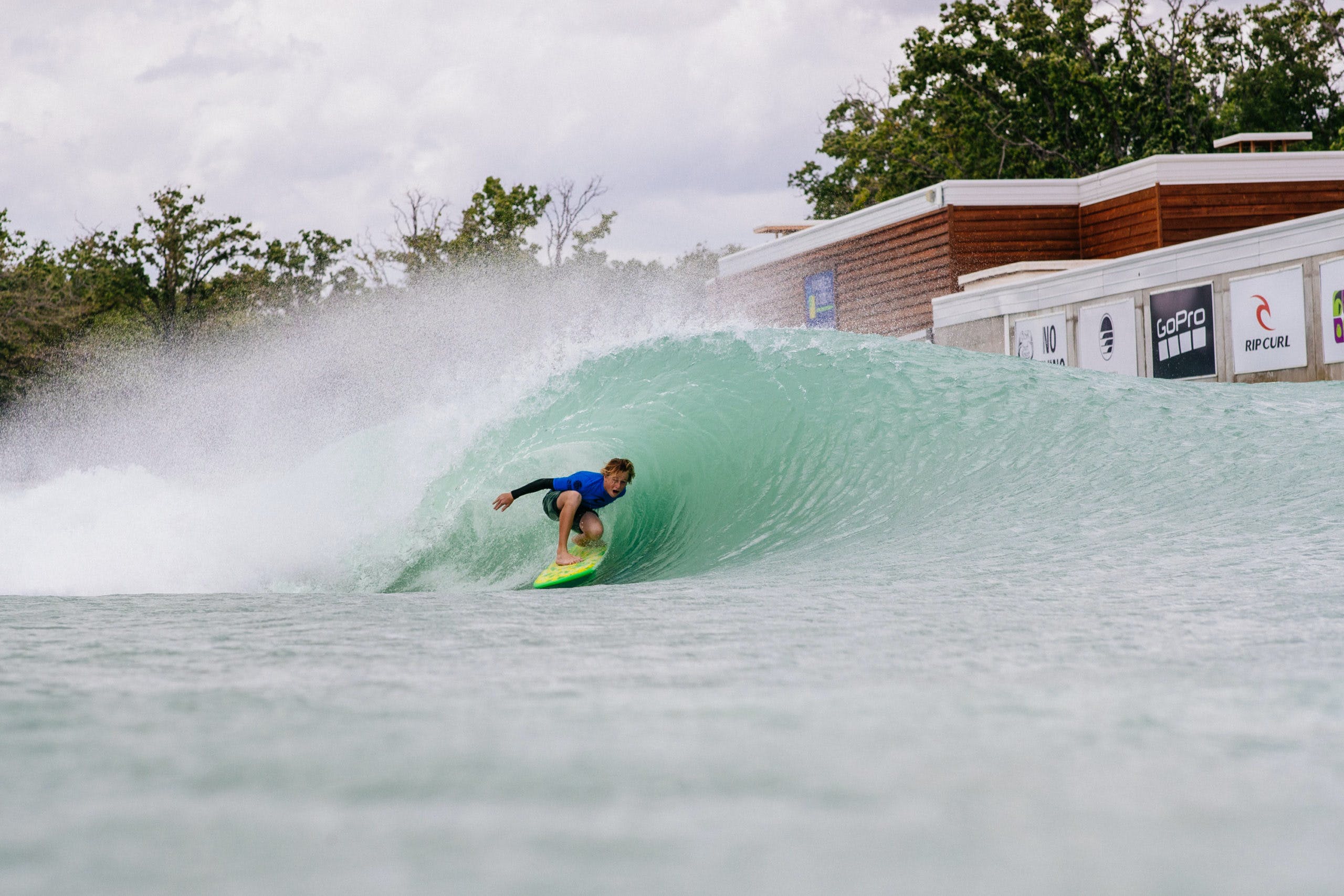 The 16/U divisions were a Lindblad landslide. The Boys 16/U Final saw Taj Lindblad take on Nico Coli in an all-San Clemente showdown. Taj started early, putting up a 9.6 on his second wave, while Nico stayed in the mid-range territory. All said and done, Nico couldn’t fight back from Taj’s 19-point combined total heat score. Taj relied on pure power and impeccable timing to take home his National Title.

“It’s crazy to win. It was so fun to surf with Nico[…] he’s one of my best friends – years ago, on this exact day we were surfing against each other in a contest during middle school – it was epic to share a final like this years later.”

The Girls 16/U Final saw the highest scores of the entire event, as Sawyer Lindblad (California) took on Alyssa Spencer (California) in an action-packed final. Both girls started off strong, putting up consistent 8’s and 9’s. It came down to the very last set – where both girls earned 9’s on each wave. When the horn blew, Sawyer defeated Alyssa by 1.1 points to take home her first GromSearch title. Sawyer also won the …Lost Surfboards High Heat total and a custom …Lost Surfboard with her 19.27 Final total.

“It was really fun. I’m just so glad I got to surf […] I tore my MCL here at BSR two months ago – so I was so happy to be in the event and come back for redemption. It was so fun surfing against Alyssa! I had a really good time and am stoked for my brother too.” 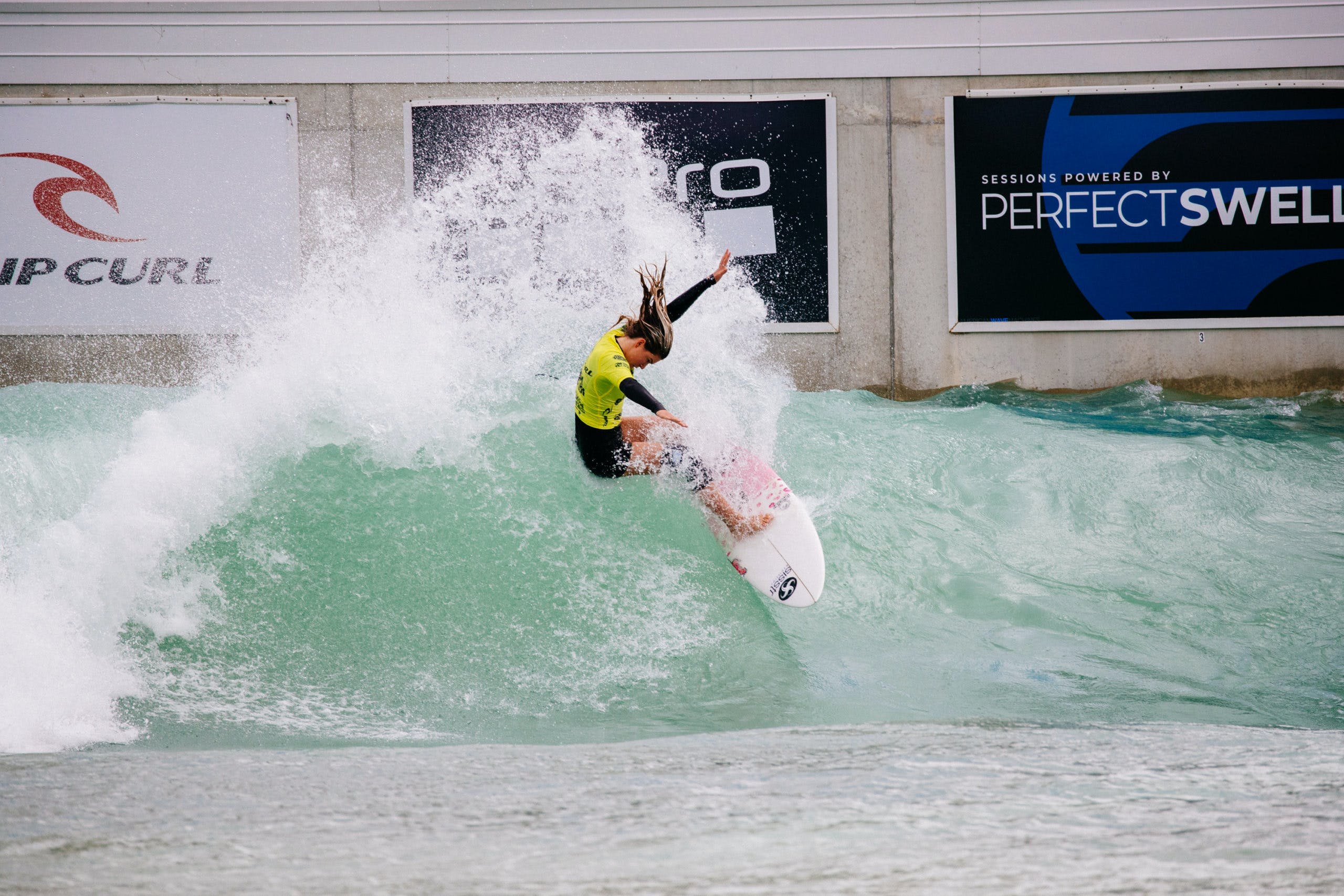 The Waco peaks seemed to have a way of suiting the younger, smaller-framed divisions – with the 14/U and 12/U Finals having the audience at the edge of their beach chairs. The 14/U Final pinned Shion Crawford (Hawaii) against Owen Carter (North Carolina). Shion was on a roll all-day, taking first in the divisions qualifier and blowing minds throughout the Banzai Bowls Airshow. He started strong, posting multiple sevens on his first set. However, Owen’s consistent excellent range scoring saw him take the Title by a 0.03-point margin.

“This one feels really good. My biggest win yet and walking with some cash. It was fun having this format in the pool. You relied a lot less on paddle battles and strategy – it really just came down to how you can perform on the wave. I’m so stoked to win this one.”

The 12/U was another close call – featuring California division rivals Eeli Timperi and Rex Hennings. These boys went back and forth, just inching each other out with every set. The scores came down to the final set, with Rex needing to hold off Eeli with just 1.16 points. Eeli did his best to score late in the heat but couldn’t catch up to Rex’s combined total of 17.16. However, Eeli did go home with a brand new one-year sponsorship deal, courtesy of FCS Fins, based on his fine surfing throughout the event.

Outside the Main Event, the specialty events were webcast must-watch material. The Banzai Airshow put Ryan Huckabee (Florida) against Shion Crawford on PerfectSwell’s custom air wave. The boys did their best to fight Waco’s south-wind but each only landed two out of eight attempts. Ryan Huckabee stomped a massive backside-3 mute on his final attempt to secure his win and $1000 in Banzai Bowls signature $2 bills.

The PerfectSwell Barrel Shootout presented by GoPro was a winner-take-all event, with the judges simply awarding the best, most creative barrel. It featured Luke Swanson (Hawaii), Ryan Huckabee, Kepa Mendia (Hawaii) and Tex Mitchell (California) and mouth-fulls of GoPro cameras. The goal was to get as deep as possible, as creatively as you can – while hitting record on the GoPro. Tex Mitchell came away with the win on his backhand, utilizing a classic Larry layback style to get the events top scoring tube. Tex also went home with $1000 and a night’s worth of dreamy visions.

The day finished with the Softech Expression session featuring six of the event’s first round qualifiers taking on BSR’s Wedge wave. The event was judged by none other than Mason Ho, via Instagram Live from his North Shore abode. Mason threw 10’s, 10.5s and even some 10.8’s – but Hayden Rodgers (California) won with style atop the softops, taking home a new Softech to perfect his craft.

All in all, after months of postponements, uncertainty, digital qualifiers and more – the event was truly one of the most special, exciting National Finals in GromSearch history. The Rip Curl GromSearch Season and National Final would not be possible without the support of our amazing partners; Banzai Bowls, BSR Surf Resort, PerfectSwell, GoPro, FCS, Softech, …Lost Surfboards, and Flexfit.

Be sure to head to Ripcurl.com/gromsearch to check out all the post event coverage and imagery. We hope to see you again next year as the GromSearch begins its 22nd season on the shores of Huntington Beach, CA in July.

Rip Curl and event producers undertook consultation from event experts and guidance in accordance with covid-19 safety protocols. All participants, chaperones and event staff were required to procure negative tests prior to attending, while following safety guidelines.

The GromSearch series gives kids 16-and-under the opportunity to compete against the best surfers in the same age bracket from their country – and eventually, the world. This format not only provides these groms an insight into a life of competitive surfing but also gives them the invaluable experience of surfing and competing in different waves around the world.